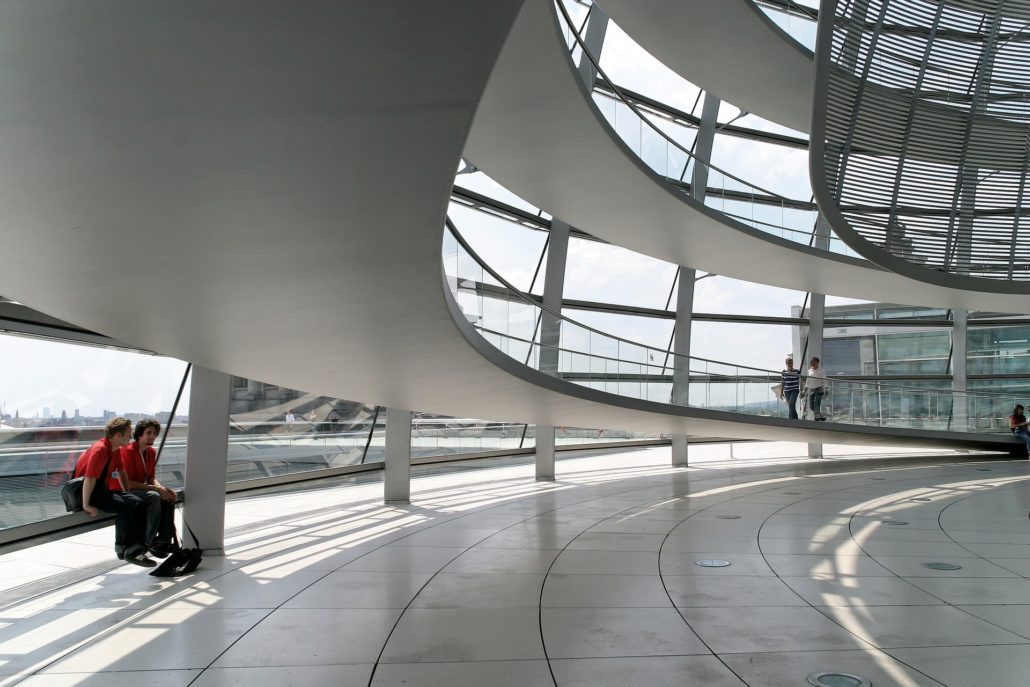 You have been in Berlin for some time and still haven’t been to the Reichstag? This is your chance! Join your language school for a trip to the glass dome – in the afternoon of November 28th. (Registration until 9.11.!)

After your German course we will visit the dome of the Reichstag building together and breathe some historical and political air. In the dome there is a viewing platform with a great view over Berlin!

The Reichstag building in the centre of Berlin is one of the most important historical buildings in Germany – it played a decisive role in both world wars. Today it is the seat of the German Bundestag with Chancellor Angela Merkel. Many important political decisions are made here!

In World War II, the Reichstag was the focus of the “final battle for Berlin” – it was conquered by the Soviet “Red” Army on April 30th. The damaged dome was demolished after the war.

In 1995 the new, modern dome was built – a masterpiece of architecture! The combination of glass and mirrors ensures that daylight falls into the plenary hall.

Maybe we are lucky and can watch the Bundestag through the glass windows during a session – or even meet Angela Merkel! Audio guides are free of charge and available in many languages – but best of all in German, right? So you can learn the right vocabulary there and then.

Registration: Do you want to come to the Reichstag in Berlin? Register by Friday, November 9th. Write an email with your (first and last) name and date of birth to: events@kapitel-zwei.de to register visiting the Reichstag.

We need to be a minimum of 5 people to start the tour!

Admission: Admission is free. For security reasons, there will be a bag check on site like at the airport.

Meeting point: In the entrance hall of the building / in the foyer. The time will be announced, as we only get our time slot after registering with our names. Expected time 3.15pm.

How to get there: From Alexanderplatz, take the bus 100 to the Reichstag/Bundestag. You will need a single ticket AB.

We would be happy if you could accompany Kapitel Zwei!