You are here: Home1 / Sustainability

Climate change is one of our greatest challenges. As a language school, we,too, have set ourselves the goal of working and living more sustainably. We’re not perfect yet, but we’re always doing our best to reduce Kapitel Zwei’s carbon footprint and support animal and environmental protection projects.

By booking our German courses and exams, you also support environmental and animal welfare projects. Find out more about it on this page!

Why this step? The climate crisis is one of the greatest challenges facing humanity. We all have to take responsibility for the solution and make an active contribution – so does Kapitel Zwei. In the coming years we want to further increase the demands on ourselves. 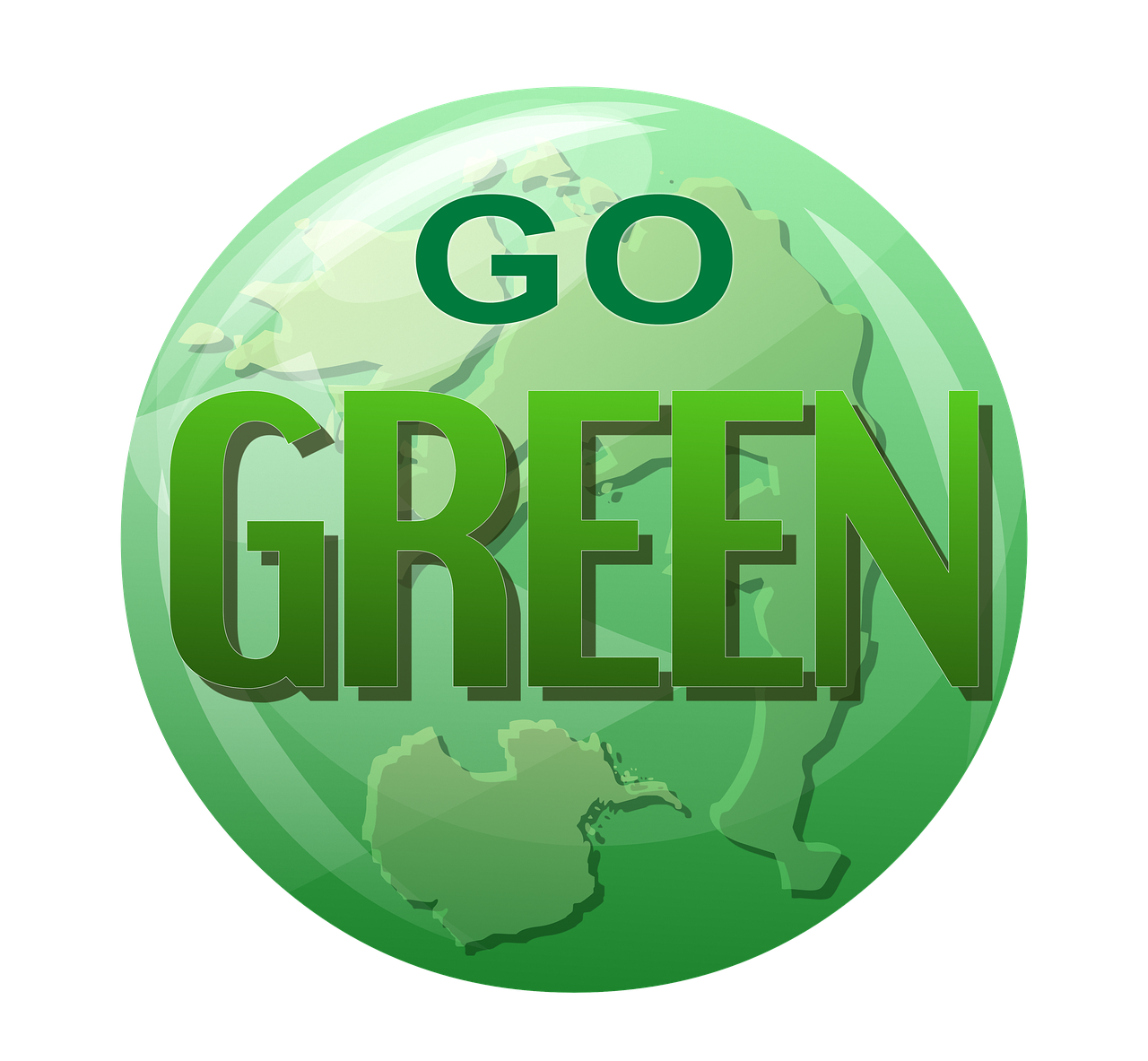 Climate protection at Kapitel Zwei Berlin: The journey so far

Use of bicycles or public transport to get to school

Vegan catering for the team, school staff and teachers

Support of the Berlin book trade with orders in the store

Digital documents | Only print out on recycled paper if necessary

Active regulation of the radiators

Instead of throwing it away, first try to repair it

Change to a cleaning company with 100% environmentally friendly cleaning utensils

We support these projects

The climate crisis is being felt more and more in Germany and around the world. Heat waves, storms and the melting of the polar ice caps are just some of the effects that people in poorer regions of the world in particular have to suffer from.

Through the Kapitel Zwei donation, among other things, the WWF is able to develop climate protection solutions, e.g. through studies, and organize events for politicians, in order to bring them closer to the WWF’s demands. In addition, public campaigns and the creation of information material on all aspects of a climate-friendly life can be supported. 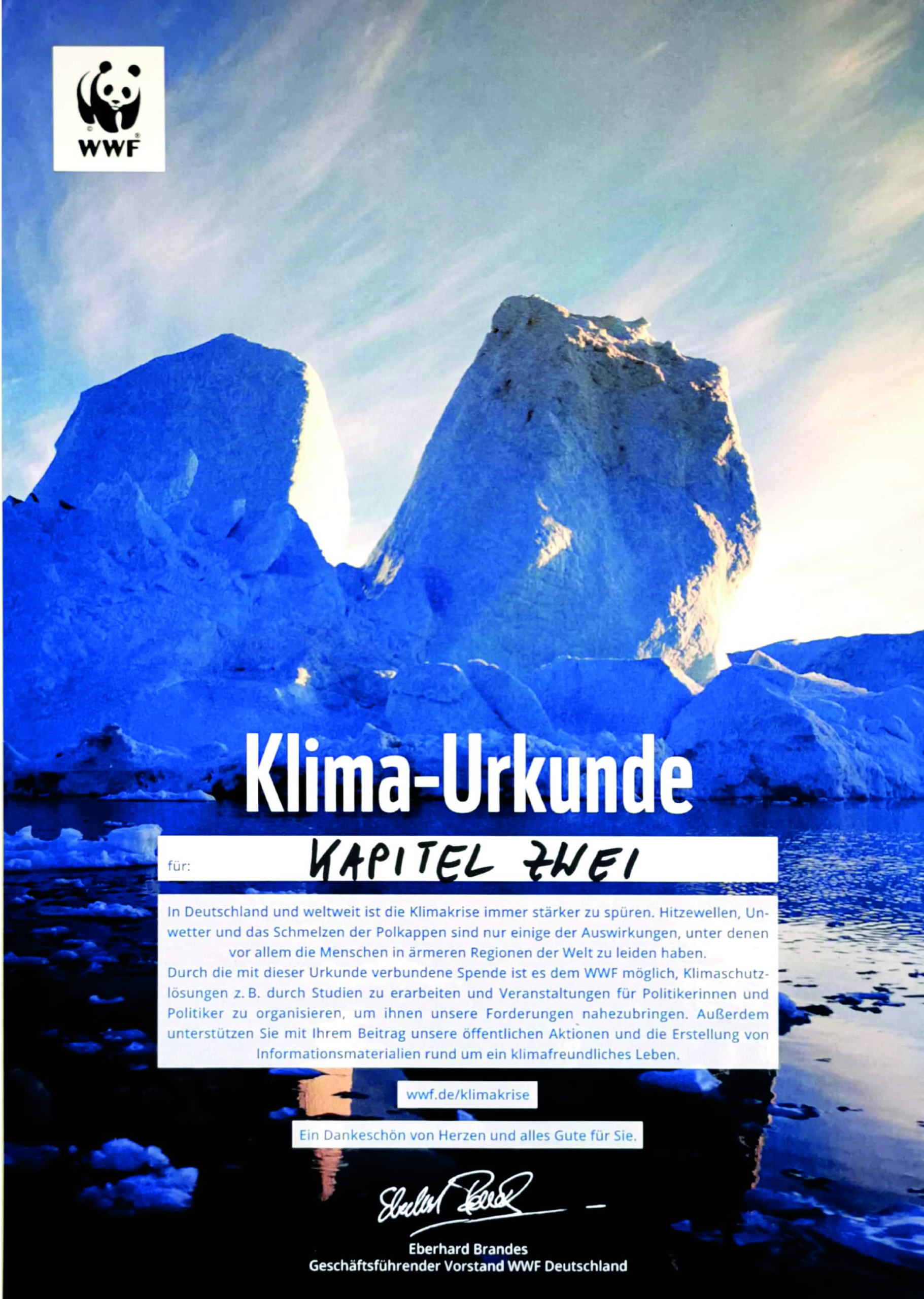 Every minute around 15,000 kilograms (!) Of plastic waste flood the oceans! Fish, whales, sea birds and sea turtles are injured or die in agony from plastic – at least 800 animal species are directly threatened. With the donation of Kapitel Zwei, the WWF can take important immediate measures, such as cleaning coral reefs and cleaning up polluted beaches. At the same time, model projects are being initiated to permanently and sustainably reduce the entry of plastic waste into rivers and oceans at the source. Together we can save the precious marine ecosystems. 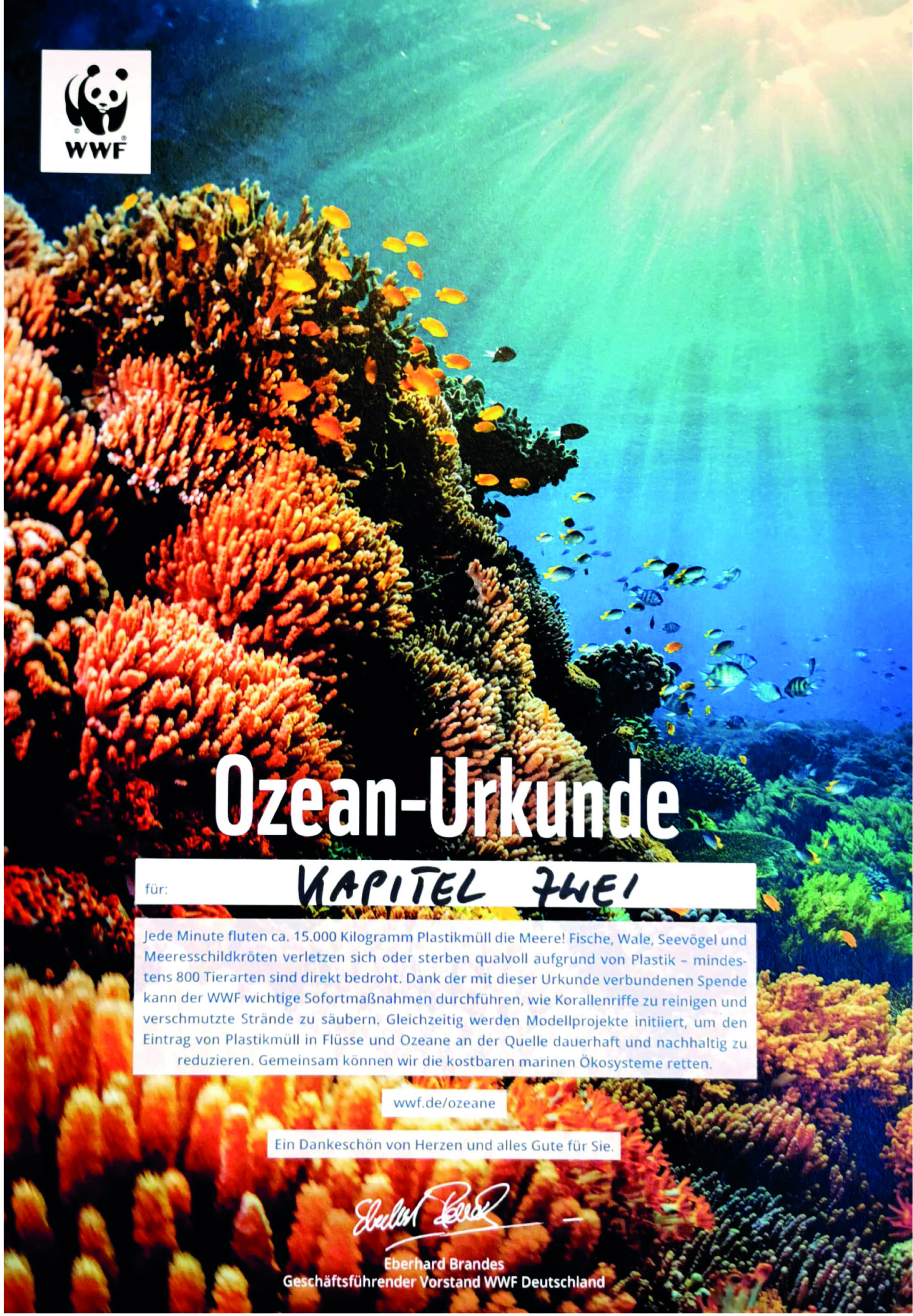 The Baka in Cameroon and the BaAka in the Central African Republic are among the oldest peoples on earth, they have lived in the rainforests of Central Africa for thousands of years. Without the BaAka and their knowledge of the rainforest, some of the nature conservation efforts of the WWF – such as the protection and research of the gorillas – would be impossible. The indigenous people know and need the jungle like no one else. Through the Kapitel Zwei donation we have received a protected piece of rainforest. For example, the WWF can secure three hectares of rainforest for a whole year – an area the size of four and a half football fields! At the same time, the donation helps implement a new agreement with the Baka in Cameroon to use the forest of the Lobeke National Park sustainably. 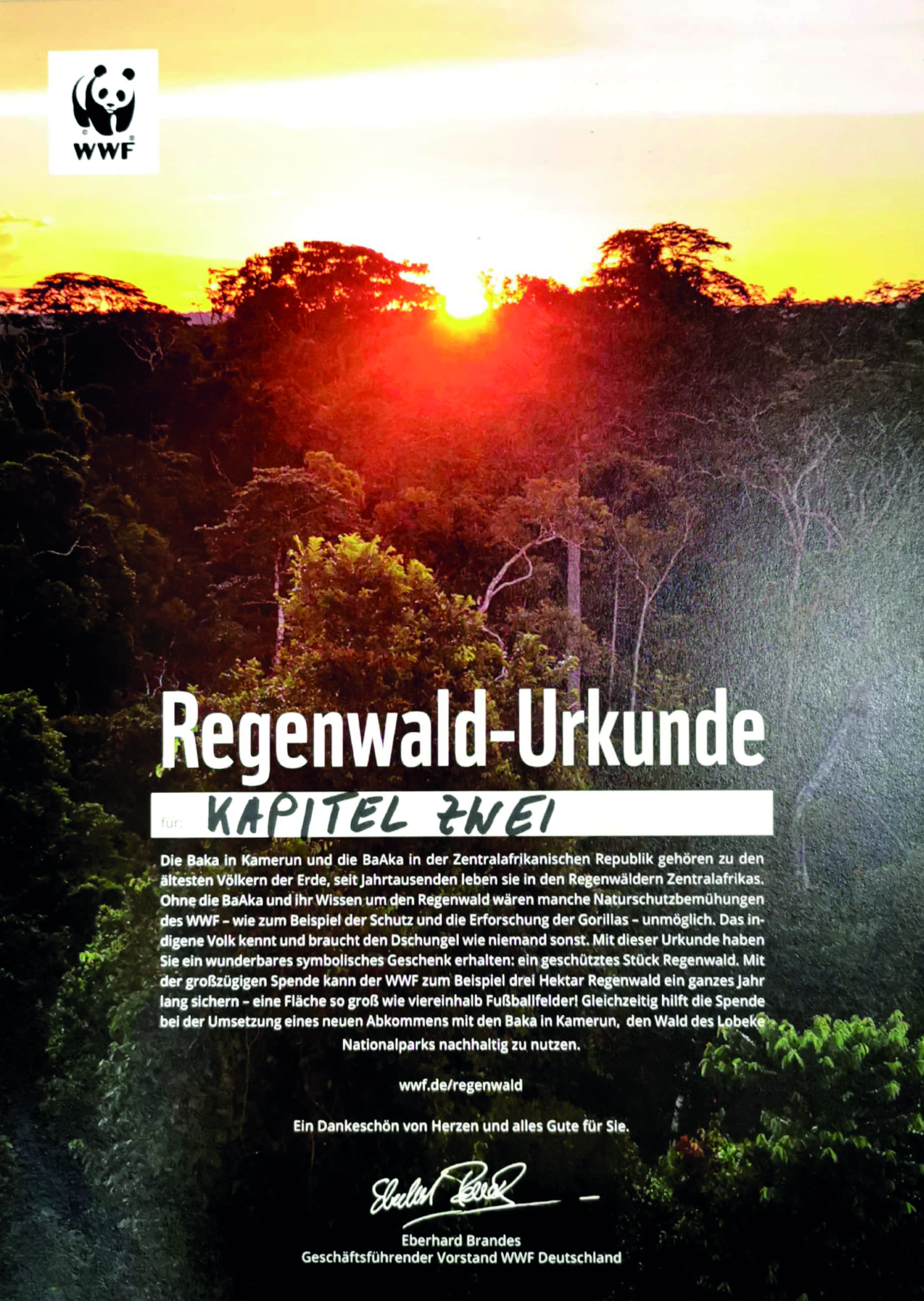 “Nanuq”, the great wanderer, as the Inuit call the polar bear, weighs only 600 grams when it is born and yet it is growing into the most powerful land predator on earth. But his existence is in danger, because he is feeling the effects of climate change particularly dramatically. The Arctic Ocean could be ice-free in summer as early as 2030 – a catastrophe for the bears. Because they need the sea ice for hunting. In order for the polar bears to survive, we have to tackle a lot! Among other things, the donation from Kapitel Zwei implements necessary climate protection work and important immediate measures such as the use of patrols to prevent conflicts between polar bears and humans. 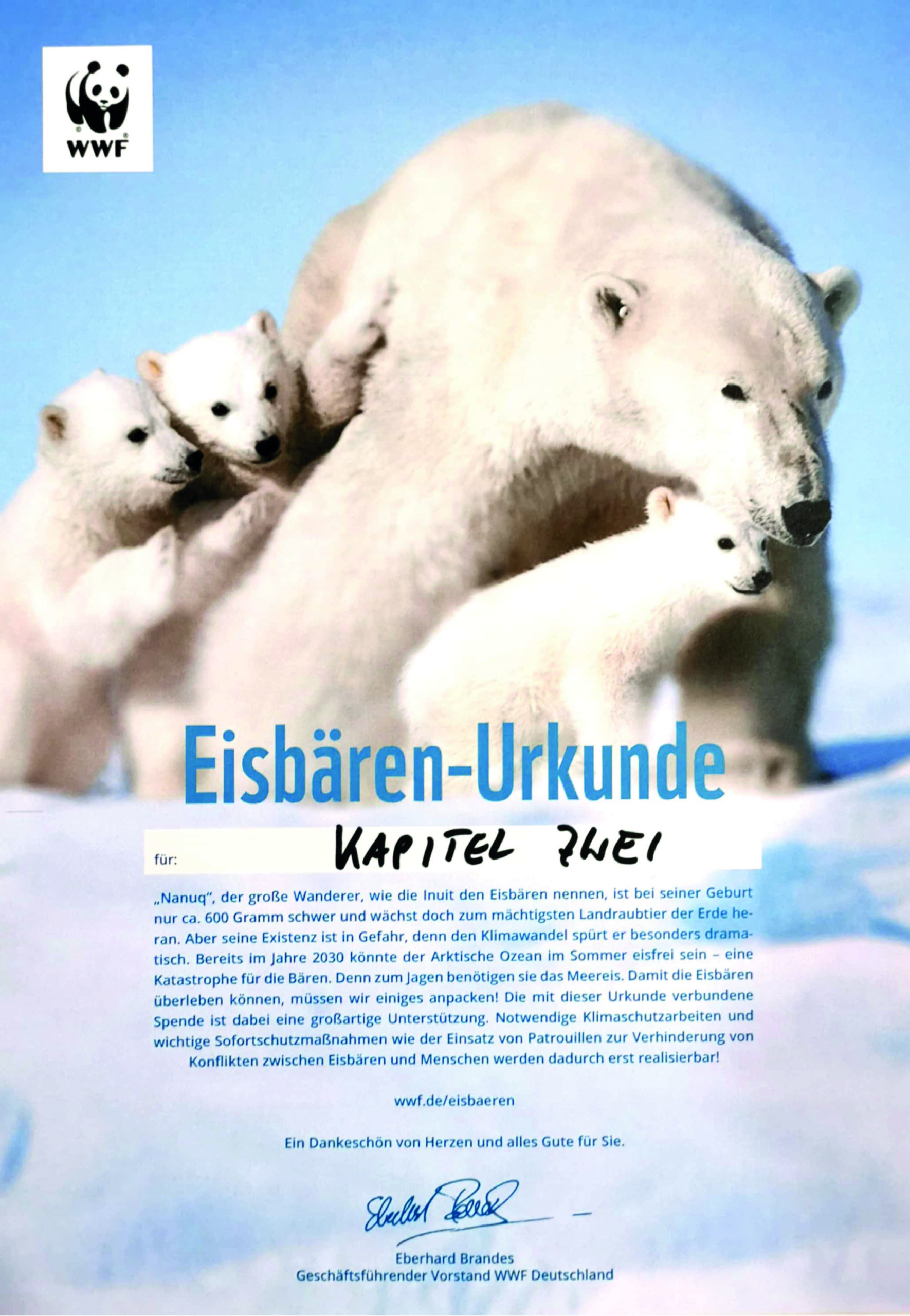 The Kapitel Zwei Berlin donation is used 100% to support PETA projects. PETA Deutschland e.V. is a partner organization of PETA USA, the world’s largest animal rights organization with over 6.5 million supporters. The goal is to help every animal have a better life by exposing animal cruelty, educating the public and changing their lifestyles. 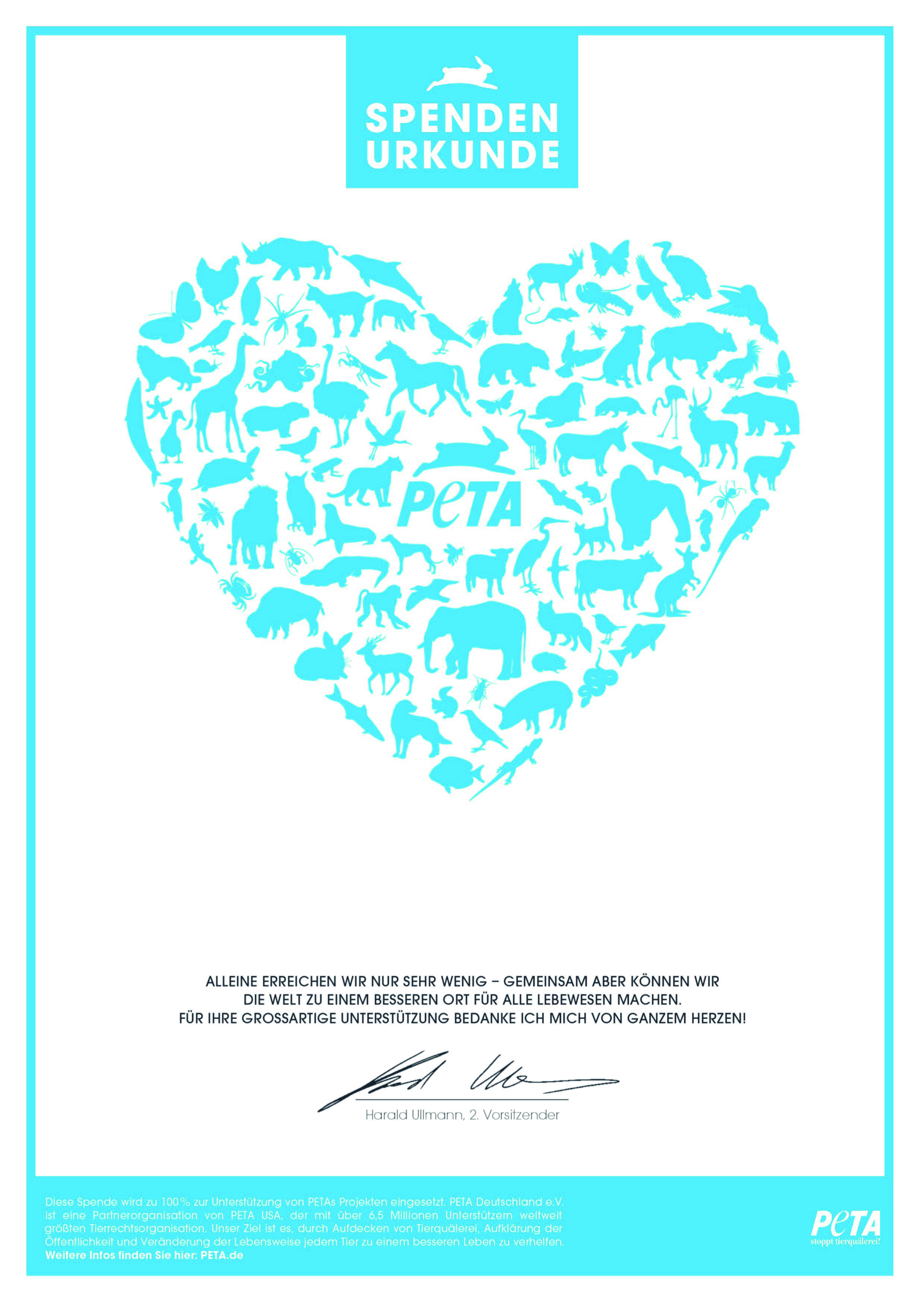 The animal welfare group Herzensmenschen is mainly committed to street dogs in Romania, but also helps at home from time to time.

The Romanian population has no financial means and sometimes no interest in having their dogs neutered, dogs are abandoned and this creates a vicious circle. On Romania’s streets you can see dogs everywhere, lots of puppies, lots of cats too. Dog catchers catch the dogs and bring them to public animal shelters, where living conditions are poor and dangerous for animal welfare.

The animal welfare group Herzensmenschen works with animal rights activists on site, in Romania, who take in and care for dogs or neglected cats from the street or from public animal shelters.

With the donations they organize castration campaigns, support animal rights activists in Romania, pay for vaccinations, help financially with the expansion of private animal shelters, buy building material for dog houses for street dogs, order food for the animals in Romania, pay veterinary bills for sick dogs and cats and much more.

An important element of their work is of course the adoption of dogs and cats. 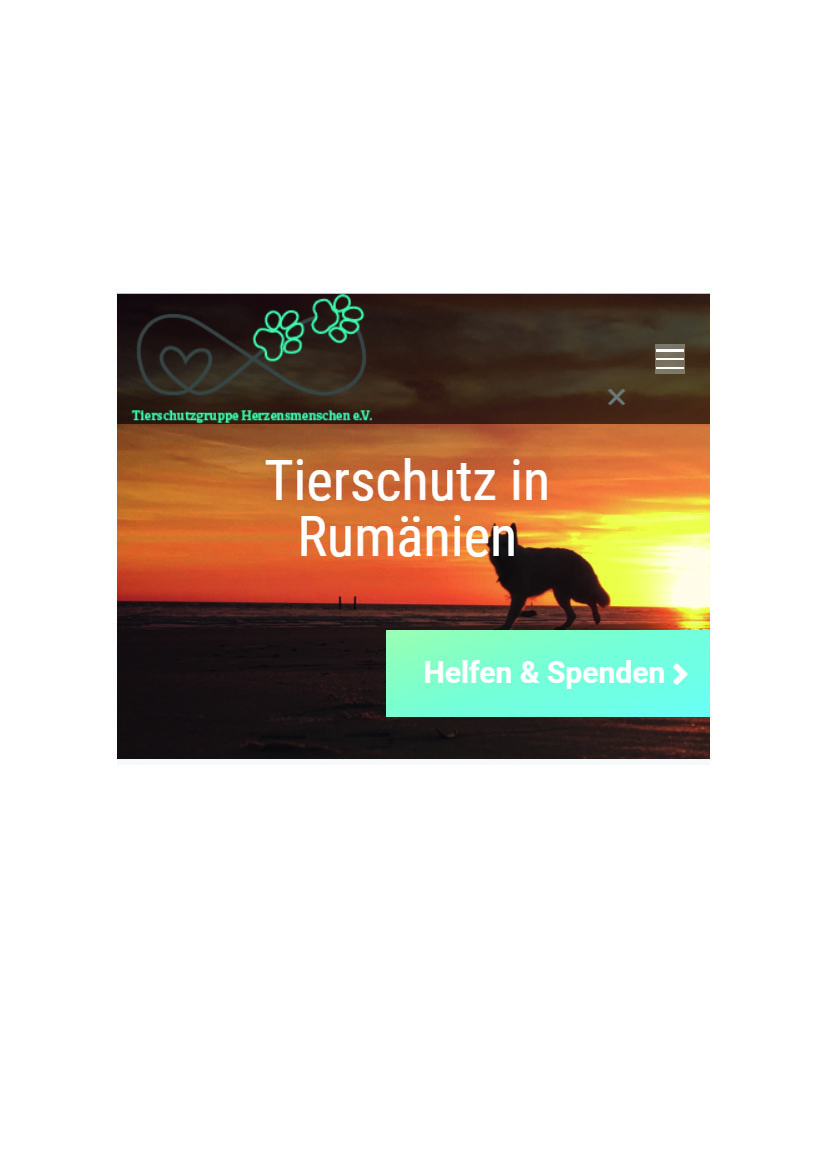 In addition to environmental catastrophes, humans are actually the biggest catastrophe and, let’s be honest, unfortunately always the cause.

Therefore, Kapitel Zwei not only supports environmental projects, but also the humanitarian alliance “Aktion Deutschland Hilft”. The alliance of more than 20 aid organisations helps human victims of major disasters abroad, quickly and according to their needs. It is currently involved in 2400 aid projects in 130 countries – yes, also in Ukraine.

The large network simplifies cooperation with local organizations and partners in the respective disaster area. 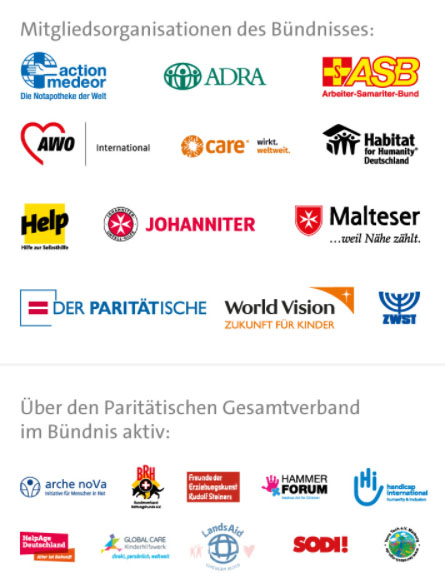 24 aid projects around the world

With the 24 GOOD DEEDS advent calendar, we support 24 aid projects all over the world every year. We also address these projects in the “classroom”. With this …

How you can protect the climate privately is also explained by the Naturschutzbund Deutschland.

Kapitel Zwei is happy if you too want to work to wake up your fellow human beings and also actively participate in environmental and animal protection.